UPDATE: ª See Technomad military PA systems in use during President Bush’s speech on board the USS Abraham Lincoln

Technomad loudspeakers are now used for the most advanced, complex, highly coordinated, and technical ‘international touring act’ in the world; The Office of the President of the United States of America.

Aside from Technomad’s Military Specification-810E durability, audio performance was ultimately the deciding factor in the WHCA’s choice to purchase the Technomad speakers as a massive upgrade to “The Boss’s” portable loudspeaker system.

Rob Davis is Pro Audio Manager of Markertek, a leading pro audio and broadcast equipment provider, based in Saugerties, New York. As the dealer of record, Rob states, “For high-performance applications, where durability and reliability are of paramount concerns, nothing comes close to Technomad.” Continuing, Rob notes, “The Technomad loudspeakers were designed for those audio applications where the equipment is going to be subjected to extreme road use and abuse. When we were approached by WHCA technical staff for recommendations on the most durable and best sounding mobile loudspeaker for the President’s sound system, I simply advised them, there are no alternatives to Technomad. Personally and professionally, I have mixed on Technomad sound systems, and aside from the fact they are the most road-worthy loudspeaker in the world, they also sound extraordinary.”

Technomad loudspeakers feature a unique cabinet manufacturing technology, called roto-molding, that was developed and first put into service in 1954. Technomad 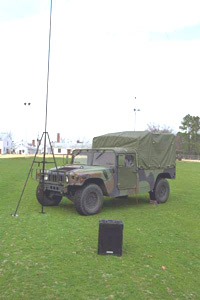 produces one-piece loudspeaker cabinets with 1/2 inch thick linear walls and 3/4 inch thick corners that are free of imperfections, such as air bubbles, stress areas and other ‘built-in’ weaknesses. A Technomad loudspeaker’s one piece, ATAIII-rated cabinet has no joints or seams joining multiple parts. Technomad’s manufacturing technique makes for a very strong, cabinet, especially in the corner areas where impact is likely to occur. The corrugation that is designed into the cabinet walls provides incredible rigidity to the entire cabinet structure, without the need for additional internal cross-bracing, supports or structure.

Force bases through-out the United States. These additional Technomad speakers are used by the President, Ambassadors, Military Officials, and visiting Heads of State.

The White House Communications Agency (WHCA), originally known as the White House Signal Detachment (WHSD), was officially formed by the War Departmenton25 March 1942 during the Roosevelt Administration. The detachment was activated under the Military District of Washington to provide normal and emergency communications requirements in support of the President of the United States. WHSD provided mobile radio, teletype, telephone, and cryptographic aids in the White House and at Shangri-La, now known as Camp David.

WHCA played silent, significant roles in many historical events to include World War II, the Korean War, the Vietnam War, Panama and Guatemala, Operation Just Cause, Operations Desert Shield and Desert Storm, and Operation Restore Hope in Somalia. WHCA was also a key player in documenting the assassination of President Kennedy and the attempt on the lives of Presidents Ford and Reagan.

The Agency evolved over the past 50 years from a small team of 32 personnel working out of the basement of the White House to a self-supporting joint service command. Headquarters for WHCA is at Anacostia Navy Yard and consists of six staff elements and seven organizational units. WHCA also has five supporting detachments in Washington, D.C. and various locations throughout the United States. WHCA is organized into functional areas each with its own mission in support of the total WHCA mission of Presidential support.