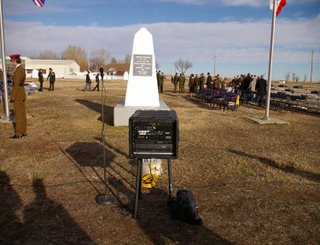 This is a very rugged and powerful system that will definitely become our primary PA system, said Cpl. Mammel, the structural wiring supervisor at CFB Suffield. The system by far outperforms our older, less rugged systems, which have performed poorly in the harsh weather conditions of the Alberta environment. We get our share of snow, rain and wind, so the weatherproofing aspect is very important. We begin setting up for an outdoor ceremony well ahead of the event, so the Technomad system is out in the elements hours before the ceremony even begins.

Mammel first came across Technomad while deployed in Kabul, Afghanistan. There, the PA system served as a camp alarm and notification system, sitting outside in the harsh desert elements on a 24/7 basis. The ruggedness and continuous operation of the system influenced Mammel to buy the Technomad MILPA2 package for use at CFB Suffield.

The Technomad loudspeakers were mounted on a 40-foot tower the entire time we were there, he said. The power in that region is very sketchy, and generators die on a regular basis. Yet the Technomads sat up there through sandstorms and brutal heat and still worked great. This is the kind of technology we look for in the Army: No matter what happens to the equipment, it has to work.

CFB Suffield first used the Technomad Military PA system on November 11 for a Remembrance Day event, and the system will be used regularly for change of command ceremonies, parades, and other outdoor events. Mammel said that two soldiers can set up the system quickly, and that the loudspeaker stands provide the professional appearance that the Army requires. The unit will also take advantage of the protective gasketed lids that come with the loudspeakers as they are setting up for an event.

He added that the SuperConductor contains CFB Suffield’s entire music library in addition to pre-loaded tracks, and he simply needs to assign a track to a specific button or position to recall the file during an event.

The Remembrance Day ceremony featured a live bugler, so we only needed to use SuperConductor for the Canadian and British National Anthems, said Mammel. However if the bugler doesn’t show up at a future event and we need to play Reveille, we would simply punch in the assigned position and off we go. But whatever audio is coming out of the loudspeakers, it will be heard loud and clear across the event location. We have never worked with a PA system this powerful at CFB Suffield.