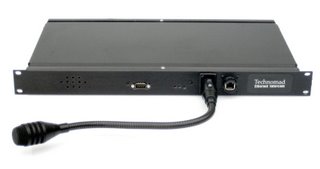 The Technomad Ethernet Intercom can be attached to an existing facility network and/or LAN infrastructure; multiple units are easily integrated to create a simple, robust and scalable communications network. A systems operator can set up audio streams to target devices in point-to-point or multipoint configurations using a simple Web interface. Target devices can include basic intercom stations at guard posts, in communication centers and in equipment rooms, or Technomad Military PA systems for alerting troops and personnel.

The Technomad Ethernet Intercom is an ideal way to extend to these systems, particularly to Modular Military PA systems which are designed to cover a wider territory. Technomad offers optional digital IP-based Link Kits for its Modular systems to form very large-area, networked PA systems (10 square miles or more) without complex programming. The Technomad Ethernet Intercom can join these PA system networks, allowing the user to alert staff in different areas of the base. An optional Zone Control function can be used in these situations to talk to specific targets.

The Technomad Ethernet Intercom, now shipping, is available for purchase as part of a Technomad Military PA system or as a separate unit to plug into an existing system. It can be configured as a desktop system or a standard rack-mount unit, and offers a quick and simple set-up process.